With the grand re-opening tomorrow there is still plenty to do. A new fire alarm to install, a security system to install, managers to get moved in, beer to get delivered (thanks to Thornbridge Brewery and Peal Ales!), wine to get on shelves, nuts to display coffee machine to install, furniture to move, walls painted, floors tiled….oh we could go on and on.

The truth is there is a mountain of work to do over the next few months and even years.  The post office and café are going to be the next big project in January and space has bee earmarked for the PO counter already and prepared.

There is a huge thank you to say to all those who have kindly volunteered time to help clean fix and hump gear around and to those who have donated equipment.  With out the help of so many people it would have been a nightmare to even consider opening so early.

The wonderful thing has been the atmosphere within the pub; people working together and creating a real feeling of community.  So there is no surprise that there is more than a hint of expectation regarding Saturday night.(2nd November) for the grand re-opening.  The re-opening of the first community owned pub in the Peak District.

At last the keys have been handed over by Admiral Taverns and the Anglers Rest has become the community hub for Bamford…shortly to include the post office and a cafe.

A big thank you goes to all involved and we hope to see you all on November 2nd for the official Re-opening.

Phew! It’s been a long time in the planning but at last the Anglers Rest is jumping into community hands.  Now comes the hard work of getting ready for the opening night on November 2nd.

Admiral Taverns and the Bamford Community Society (BCS) can now confirm the sale/purchase of The Anglers Rest.Contracts have been exchanged and a completion date set – October 28th. This means that from this date The Anglers Rest will be in community ownership and will remain a village asset in perpetuity. It will continue life as the village pub but will have the addition of a cafe and the village post office.

Andy Clifford, Group Property and Strategy Director at Admiral Taverns, has asked us to pass on the following message on behalf of the whole company:

“Congratulations to the Bamford Community Society on what is a great achievement and testament to the determination and ambition of the Bamford community.

We would also like express our desire to assist where required and are happy to help in introductions to our industry contacts and network of suppliers, and providing any assistance we can as you begin this exciting enterprise.

We would like to wish you our very best and look forward to passing the ownership of the pub to you and hearing of the success of the community hub in the future.”

Dave Treacher, Chair of the BCS Board of Directors, commented:

“This purchase has been made possible by the tremendous support for the community share scheme. The total sum raised to date is £206,750 from 244 investors with over 80% of these investors having a Bamford address. Each shareholder will have a stake in the future of the Anglers Rest – they will be able to use their vote at each AGM and stand as a Director.”

We are now working as quickly as possible to move to an exchange of contracts with Admiral Taverns to purchase the Anglers Rest and we will let you know as soon as we have reached that momentous point.

As you may imagine our Community Share Offer suffered a set back during those turbulent two weeks when it looked as if we were close to the complete failure of the project. In light of this, the directors have agreed to extend the share offer by a further two weeks and the closing date will now be Monday October 14th.

This extension is vital as, although we have surpassed the minimum target of £180,000 and have an investment total of £195,750, we really do hope that £250,000 is a realistic figure to achieve within the new time frame. If we can raise this total it will reduce our borrowing needs and hence our interest repayments and would clearly help the community hub to get off to a flying start.

Please continue to encourage family and friends to commit to buying a share. Any shares bought now will make a huge difference and we are anxious for people to recognise that the project is still in need of investment.

The last pub in a Derbyshire village has been saved, after Admiral Taverns rescinded a sale to a developer, and has committed to selling to a community group who will run the pub as a social enterprise.

But the Bamford Community Society are urging people to continue to buy shares in the business in order to secure its long term future.

The Angler’s Rest in Bamford was registered as an Asset of Community value by the Bamford Co-operative Society (BCS), who intend to run the pub as a diversified business featuring a pub, post office, cafe, parking and bunkhouse accommodation. The pub had been through ten landlords in ten years and local people decided to launch a share offer to save the pub and run it themselves.

The group entered into an agreement in principle with Admiral to buy the pub and also agreed a price, but just as they raised the money needed the brewery exchanged contracts with a third party developer.

Mark Bawden, member of the BCS explains, “The people of Bamford have worked for 18 months to secure the future of the pub and also to prevent the Post Office from closing, by housing it in the Angler’s Rest.

“The only issue we have now is that fundraising has been suspended for the three weeks since Admiral exchanged contracts with a third party. Although we have raised enough money to buy the pub and do the immediate work required, we are relying on a loan to make up the balance. At the moment we have £184,000 in shares, but the full cost is £320,000, so we would urge people who believe in what we are doing to put their hands in their pockets and buy a share.

“During our campaign nobody could fail to have been touched and delighted by the passion, spirit and commitment of the village community. This new venture is going to be the heart of the community and the fact that it is run by and for local people will make it a real community hub.

“The people of Bamford know the value of their community services and were willing to put time, energy and money into keeping them alive. This a real triumph for local people over big business. We also want to take the time to thank all of the pople worldwide who have offered their support and we look forward to welcoming them to the Angler’s Rest in the near future.”

It would be easy to point fingers and comment.  It would be wonderful to bask in self glorification.  The truth is that for once the right outcome has been reached.

The owners of The Anglers Rest, Admiral Taverns, have today decided that…yes it should be sold to the community.

This wasn’t a decision arrived at without some little persuasion.  Many individuals have worked hard to bring about , but the right decision has been made in the end.

Now comes the hard work of converting an offer into reality.  This isn’t going to be just a pub.  It’s going to be a community hub.  With a Post Office and a cafe.  An asset for all to enjoy from early hours to late at night.

The share offer is still open and further investment is very welcome. 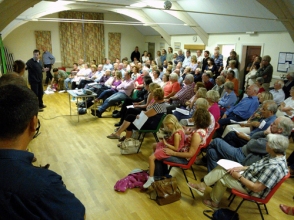 With a packed house on Wednesday 4th September the Bamford Insitute played host to a discussion on the future of the Anglers Rest.

The current situation was clearly explained by Mark Bawden along with other members of the BCS.  Questions were raised about the legality of the current legislation regarding Assets of Community Value and there was a general consensus that the BCS should continue to fight to have this inspected and to overturn the sale of the Anglers Rest to a developer.

It quickly became clear that people attending the open meeting were offering far more than just moral support.  Individuals recognized the expense involved in persuing such a fight and were more than happy to donate funds for the cause.

As such the BCS has set up a “fighting fund” which you can donate to here (http://www.bcs.hopevalleyderbyshire.co.uk/Fighting_Fund.html).

It should also be noted here that many members of the BCS steering group have provided considerable personal funds, as well as time, to securing The Anglers Rest and developing it into a community hub.

Watch BBC Look North at 6.30pm and take look at what a village can lose under current law http://www.bamford.coop 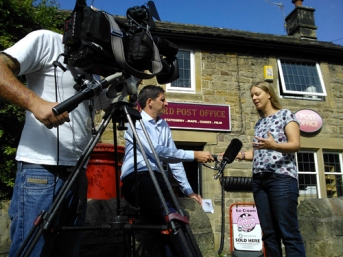